If you’re a Motorsport aficionado, you’re going to want a watch with racing heritage. It goes without saying. But which watch? The first that comes to mind might be a Heuer Monaco; after all, it has that connection to the Le Mans. That’s a movie though, you think. What about real motorsport? A Rolex Daytona, or an Omega Speedmaster? They’re a little obvious, you say, because you’re notoriously difficult to please.

How about, then, the watch worn by the winner of the first ever World Rally Championship?

The Roamer Stingray Chronograph isn’t a watch you hear talked about every day, but it’s perhaps the watch with the strongest racing pedigree. Björn Waldegård, winner of the inaugural World Rally Championship for Drivers in 1969, wore this chronograph while he raced, making the Stingray the first watch to ever pass the Rally Championship finish line. Waldegård was even featured in an advert for the Stingray. 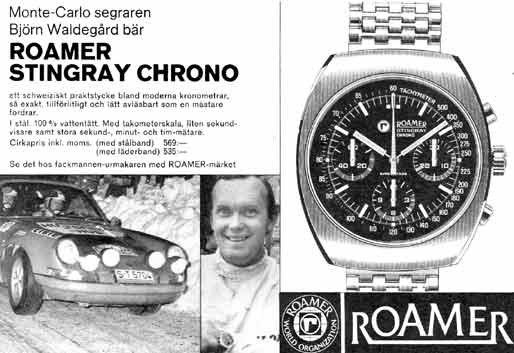 Roamer began making watches in 1904, often winning medals for their new movements at world fairs. Their reputation for high-quality movements came to a head with the creation of the celebrated Valjoux 72, a movement that ended up being used in a variety of chronographs from other watchmakers. Some highlights include the Rolex Daytona, the Breitling Navitimer, and Tag Heuer’s Carrera, Autavia, and Camaro.

The movement was advertised as having ‘Everything you need, and nothing you don’t’, which describes the Valjoux 72 to a tee. That said, sometimes a watch has features you might not need per se, but you definitely want them. For this, the Valjoux 72 evolved – becoming, say, the Valjoux 72C for Heuer’s triple calendar chronograph ref. 2543. With a calendar and moonphase, it’s the 88. Or with a GMT complication, it became the 724. The Valjoux 721 will give you tide times. The 720 is almost the same, but with a flyback function. 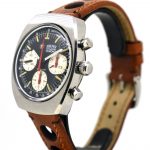 The Valjoux 72 remains a classic piece of design, and the Roamer Stingray remains a unique watch with a high-quality build and fantastic ties to motorsports. It’s not as big a name perhaps as your Monacos or your Daytonas, but it’s got just as much quality and history – if not more.