TAG Heuer have been known for their strong advertising since 1991, with the launch of their ‘Don’t Crack Under Pressure’ campaign. TAG had bought the Heuer brand in 1985, and one of their first decisions was to establish themselves as a high-quality sports watch brand. To do this, they created ads featuring prominent figures in professional sports as ‘Ambassadors’.

The main theme of the ‘Don’t Crack Under Pressure’ campaign was one of mental fortitude, rather than physical. The ambassador would be shown deep in thought; no doubt steeling themselves for whatever game or race they’re about to take part in. There was also a stripping down of the actual product info in these ads, relying more on the style and the brand itself to make an impression. 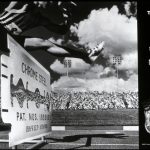 ‘Success. It’s a Mind Game’, in 1995, took these concepts even further. Abandoning the recognisable faces of professional sports, the campaign focused on the sports themselves – and the kind of focus and fear going through an athlete’s mind. The television version of the ad even blurs the faces of the athletes.

They’re frighteningly clever adverts, managing to be unique, eyecatching, and inventive all at once. They feature even less product info than the ‘Don’t Crack Under Pressure’, just enough to tie the brand in. There’s also a shift from pure sport – it’s not Winning, it’s Success.

TAG Heuer moved back to the more traditional brand ambassadors approach in 1998, with their ‘Inner Strength’ and ‘Beyond Measure’ campaigns, but the ‘Success. It’s a Mind Game‘ ads are by far the most memorable – we recently got a bunch of 90’s era TAG Heuer watches in the store, and these adverts were the first thing that we thought of. Success really is a mind game.

This website uses cookies to improve your experience while you navigate through the website. Out of these, the cookies that are categorized as necessary are stored on your browser as they are essential for the working of basic functionalities of the website. We also use third-party cookies that help us analyze and understand how you use this website. These cookies will be stored in your browser only with your consent. You also have the option to opt-out of these cookies. But opting out of some of these cookies may affect your browsing experience.
Necessary Always Enabled
Necessary cookies are absolutely essential for the website to function properly. This category only includes cookies that ensures basic functionalities and security features of the website. These cookies do not store any personal information.
Non-necessary
Any cookies that may not be particularly necessary for the website to function and is used specifically to collect user personal data via analytics, ads, other embedded contents are termed as non-necessary cookies. It is mandatory to procure user consent prior to running these cookies on your website.
SAVE & ACCEPT