The Submariner, In Depth

Rolex was founded in London in 1905 as ‘Wilsdorf & Davis’, before adopting the company name Rolex in 1915 and moving to Geneva four years after that. The name was chosen for its easy pronunciation in any language; its symmetry and brevity allowed it to fit easily on the dial of a watch. 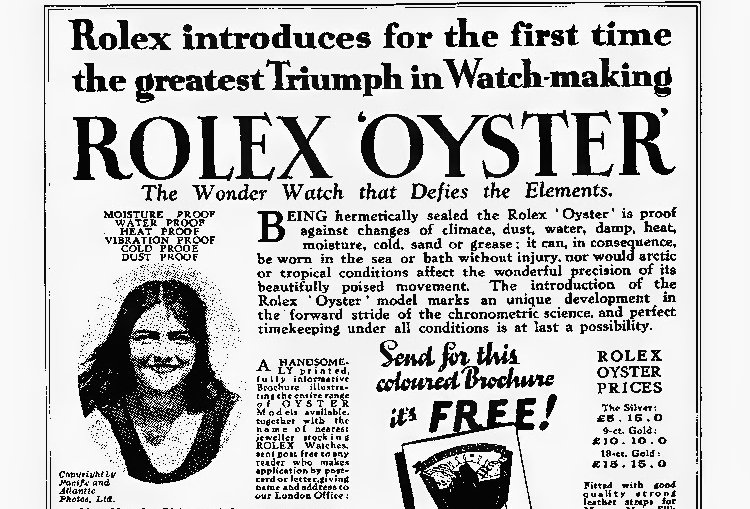 a Rolex Oyster as she swam the English channel – a 10 hour feat of endurance that doubled as a great endorsement for the quality of Rolex’s cases.

Despite being a relatively young company when compared to other Swiss watchmakers like Patek Philippe, Audemars Piguet, or Vacheron, Rolex pioneered a good few industry standards – the aforementioned waterproof cases, yes, but also the first watch with an automatically changing date (the Datejust), and the first watch to show more than one time zone (the GMT Master).

Rolex were keen to break new ground whenever possible. Aware that their watches could function both as elegant, formal timepieces and rugged, reliable tools, founder/president Hans Wildorf was on the lookout for new ways of expressing this versatility. A diver’s watch was a perfect example.

The idea came from a director at the company, Rene P. Jeanneret, who outside of his work for Rolex was an avid deep-sea diver. His suggestion was a new design that could be worn as a classy, everyday watch, whilst also able to function during a deep dive. Thus, Rolex unveiled the Submariner in 1953, the same year they released the Explorer to celebrate the ascent of Mt. Everest. 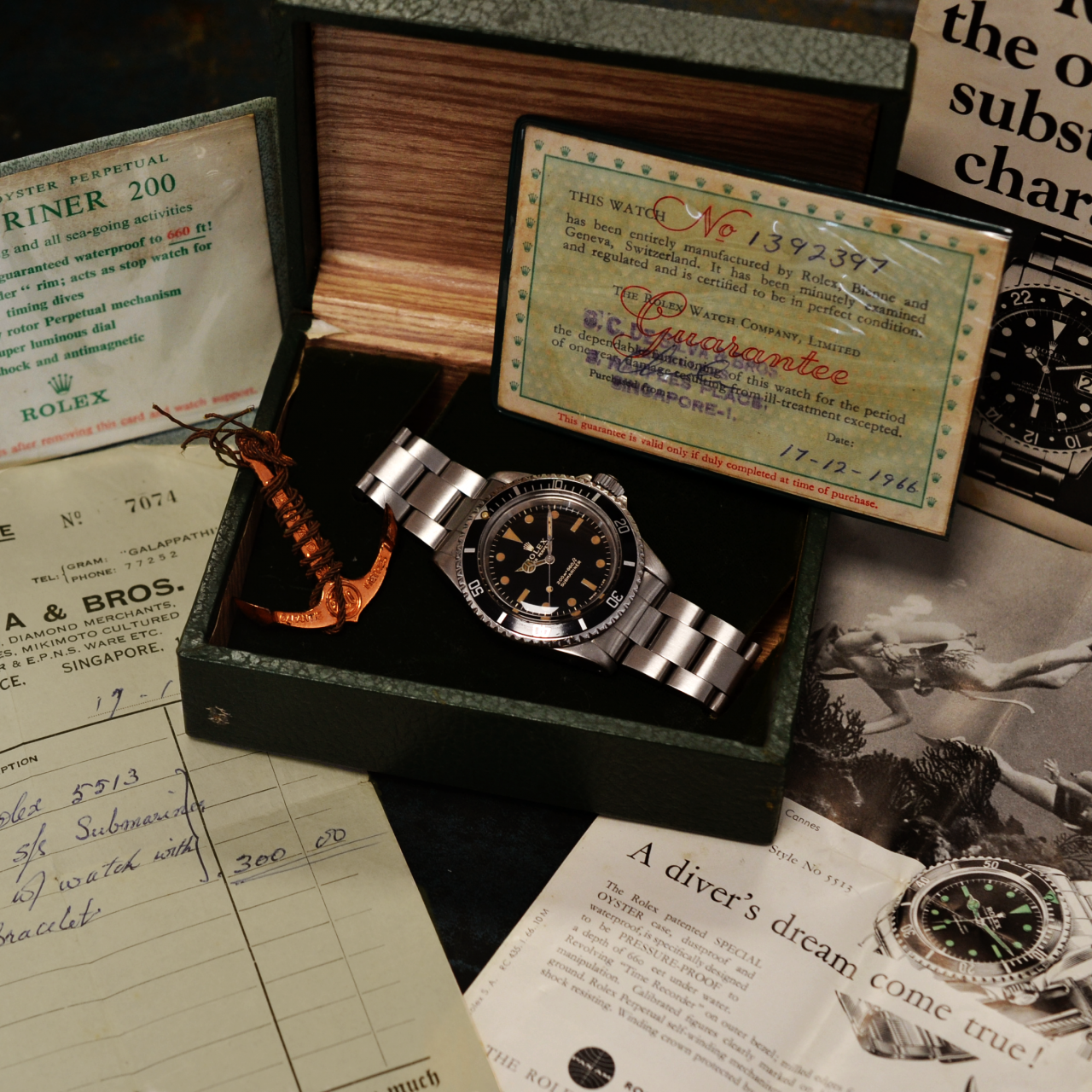 The original Submariners are somewhat different from the Submariner that’s recognisable today. They featured straight, pencil-style hands as opposed to the distinctive hands in the modern version of the watch, and very few – if any – featured the name ‘Submariner’ on the dial. It isn’t certain as to why this was – as Rolex definitely refers to these models as Submariners in their promotional materials – but it’s thought that there was an issue with copyright at the time.

Despite these differences between the modern style and the very first versions, most features have been consistent: the distinctive dial with large luminescent hour markers, graduated rotatable bezel, and since 1954 the distinctive ‘Mercedes’ hands became standard. The bezel can only be rotated in a counter-clockwise direction, which ensures a diver’s safety in the case of accidental manipulation underwater, since time cannot be added to the measure of their air reserve, only removed. In the worst-case scenario, the diver surfaces a little early, and is eaten by a shark.

In the same way the original Oyster case had a widely-publicized test in the water, Rolex would again prove the quality of their manufacturing when Professor Piccard’s bathyscaphe, the Trieste, dove 35,800 feet to the bottom of the Marianas Trench. Attached to the hull of the Trieste was a specially made Rolex case – which emerged unscathed and keeping perfect time after the dive, despite having been subjected to over seven tonnes of pressure. Rolex used what they learned from this to improve the Submariner over the following years.

Notable in regard to the original Rolex Submariner is the original Tudor Submariner. For those unfamiliar, Tudor was founded by Rolex’s Hans Wilsdorf as a daughter company to Rolex. The intent was for Tudor watches to be more affordable, but with the same high-quality production as a Rolex watch.

There’s a tendency to look at the Tudor brand as inferior, the ‘poor man’s Rolex’; but in actuality – and especially in early examples – there are a lot of cases where the only difference between a Rolex and a Tudor is the logo on the dial.

The Tudor Submariner was introduced in 1954, a year after Rolex’s version. Early versions of the watch had very short production runs – typically a year or even less. In the case of the Tudor Submariner ref. 7923, it became so rare that few collectors even believed it to exist – calling it at best a prototype, and at worst a ‘Frankenwatch’, cobbled together from other models. Some of this disbelief perhaps came from the 7923 being manual-wind rather than automatic, setting it apart from other Submariners.

Something you might note, hearing this, is that a Tudor has the same collectable status as the different Rolex offerings – among more seasoned collectors, at least. It’s easy to forget that Rolex’s prestige arose not just because of the brand name existing as a status symbol, but because the quality of their watches was top of the line. The same could be said of Tudor’s quality – only without that brand name sat on the dial.

Rolex calls the Submariner ‘the archetype of the Diver’s watch’. This title, then, must also belong to the Tudor versions. Sure, Rolex might be the king of the Submariner – complete with a crown and everything – but it’s difficult to make out the name on the dial when you’re 1,000 feet below sea level.

HistoryRolexSubmarinerTudor
Posted in Rolex, watches.
Share
PreviousThe Patek IOS, and the Fall of a Financial Empire
NextOmega, Before the Moon
Basket Close